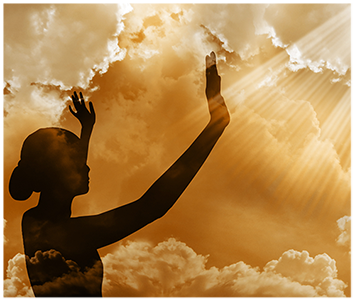 As a Christian business owner I designed, made and donated two custom memorial clergy stoles after the horrific, senseless shootings at Sandy Hook School, Newtown, CT and the Orlando, FL Pulse Nightclub shooting. With each stitch I prayed for the souls that were lost and the family and friends of each victim. Each of these stoles were blessed by my priest before being donated.

With many tears as I created, designed and made a clergy stole in memory of the young children and their teachers who died in the Sandy Hook School shooting. The stole was created with a beautiful white on white fabric. A gold angel was embroidered on each side of the front of the stole along with the names of the twenty-six that lost their lives that horrible day. Also embroidered, from right shoulder around the neck to the left shoulder was “Blessed are those who mourn for they shall be comforted” Matthew 5:4.

Right Picture – Memorial stole showing the names of each soul lost that day, gold angels and beatitudes around the neck of stole. 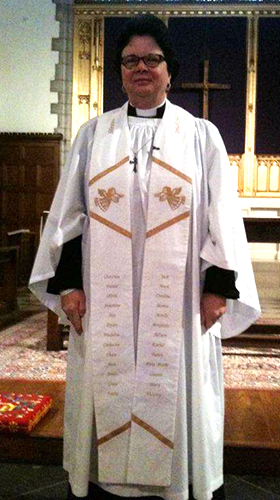 Praying and asking God, when is this violence against innocent people going to end, Laurie knew she needed to create another memorial stole. This stole, in memory of the forty-nine people that died in Orlando, FL at the Pulse Nightclub, a senseless hate crime that changed the lives of so many people. The stole was made of crisp white tone on tone fabric with two of Matthew’s beatitudes embroidered in gold on the front of the stole “Blessed are those who mourn for they will be comforted” and “Blessed are the peacemakers for they will be called children of God.” Under the beatitudes were embroidered in gold the first names of all forty-nine people that died that evening at the club. On the lining of the stole was embroidered “In loving memory of those who lost their lives at Pulse in Orlando, FL on June 12, 2016. May they rest in Peace.”

Left Picture – The stole showing the names of each soul lost that day and the two beatitudes on the front of the stole.

Right Picture – Me holding the memorial stole before it was blessed at my church.